For the same perverse reason people think it’s a good idea to put a chicken inside of a duck inside of turkey, I gave Parallels Workstation a try. Parallels Workstation allows you to run multiple operating systems from within a single host operating system. Here’s an insane shot of my Macbook Pro running Ubuntu Linux (the new Dapper Drake Flight 6 bleeding edge version) simultaneously with Windows XP; and, for extra credit, Karate Champ in MacMame:

I get a kick out of the fact that both XP and Ubuntu boot faster in the virtual machines on my Macbook Pro than I’ve ever seen them boot on real hardware.

In exchange for putting up their website, we have some contractors here replacing our current roof which had been in very bad shape. Roof replacement is a painful process of discovery.

Some genius who worked on this roof before we moved in decided it was a good idea to: 1) Cut some kind of access hole directly into the roof. 2) Cover it up with shingles and nothing else. Gah!

This is what happens when you don’t put drip edge on a roof. Shingles and siding become mere decorations rather than actual water-repelling implements. Without the drip edge, water ran behind our siding and into our living room and caused holes to form in our roof due to stagnant pools of water.

Josh, welcome to your new role as a homeowner!

Still, I’ll gladly take this over renting any day. It’s a tradeoff we’re happy to make.

On Monday my new Macbook Pro arrived. Three days earlier it was in a factory in Shanghai! Why can’t everyone be as efficient as FedEx?

When I was in 2nd grade, there was a computer in our class and the teacher would let me stay after class to type in programs from a magazine. One of the programs I typed in made some kind of cool graphics display when I finally finished typing. Well, cool at the time, anyway. I was sold onto computers ever since. Picking up on my interest, my parents got me an Apple //c for my birthday which ranks up there as one of the most influential things they did for me.

I kept typing away. While the cool kids were outside playing, I was busy typing in programs from Nibble magazine, which is probably what created my appreciation for programming. Makes me wonder how such an interest is conveyed to today’s kids.

Sure, Lode Runner LOOKS colorful, but all I had on my Apple was green on black! The kids that had Commodore 64s had it better, since the games were superior.

So, I’ve now come full circle with my return to Apple. And like a million other dorks, I’ve posted geeky pictures of my Macbook on my blog.

The cool styrofoam all the Mac dorks keep talking about.

The little square box contains all the user manuals and CDs. Very compact and well designed. And the little remote is cute. You use it to control Front Row, a media center for OS X.

Behold the shiny X. Your brain shall be imprinted and uploaded for review by the cult of Steve.

The machine is very fast. From poweron to desktop took all of some number of seconds that I didn’t count.

Since I am such a greedy bastard I have three laptops now. One runs XP, the other runs Ubuntu Linux, and now I’ve got the Macbook. A buffet of the best and worst of each world.

Overall, I’m enjoying the Macbook Pro quite a bit. I’m still trying to get used to the Apple way of doing things. They certainly put a lot of effort into the look-and-feel of every application. I hope that the attention to detail extends beyond the “ooh, shiny” aspect of the machine. 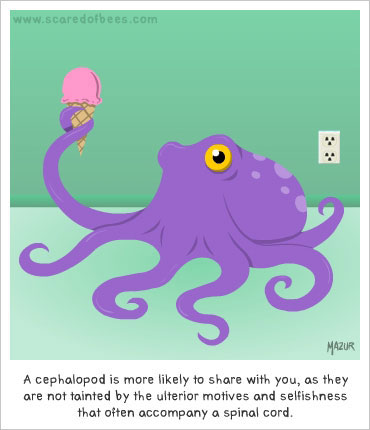 (via Cthulhu InThePants; see more from the artist)

I’ve been trying very hard to avoid regurgitating content from other blogs but I couldn’t help myself in this case: a post on boingboing about a fart-powered missile launcher:

So since I have no real direction in life, I thought I’d contribute to their post by extracting the original patent’s images from the US Patent Office’s website, whose document image system is very cumbersome to deal with. Highlights:

It must be fun to work at the patent office sometimes.

Here are the full page extracts of the original patent:

Perks of the office

My jury duty adventure is going to begin soon. I was recently summoned, and I am supposed to report to the Roanoke County courthouse next Monday. They sent me a little questionaire to fill out, and they include a list of types of people that are automatically exempt from jury duty so you can be sure you aren’t wasting your time. The highlighted item made me laugh out loud:

What made me laugh was the combination of several bizarre ideas: 1) The idea of the President or Vice President actually sitting down and filling this form out; 2) The idea that someone would mail either of them this form in the first place; 3) The idea that the space taken on the form for this option is only relevant to two out of so many millions of potential jury pool members that the form is mailed to.

Though I seriously wonder if our current president would be sharp enough to realize he is exempt for jury duty.

And yesterday i determined that the Irish emmigrated to Hawaii. And became the “Hawairish”. And their most common last name is O’Loha.

Here is the latest in the line of things that you never expect to say but end up saying because you are parenting a toddler: